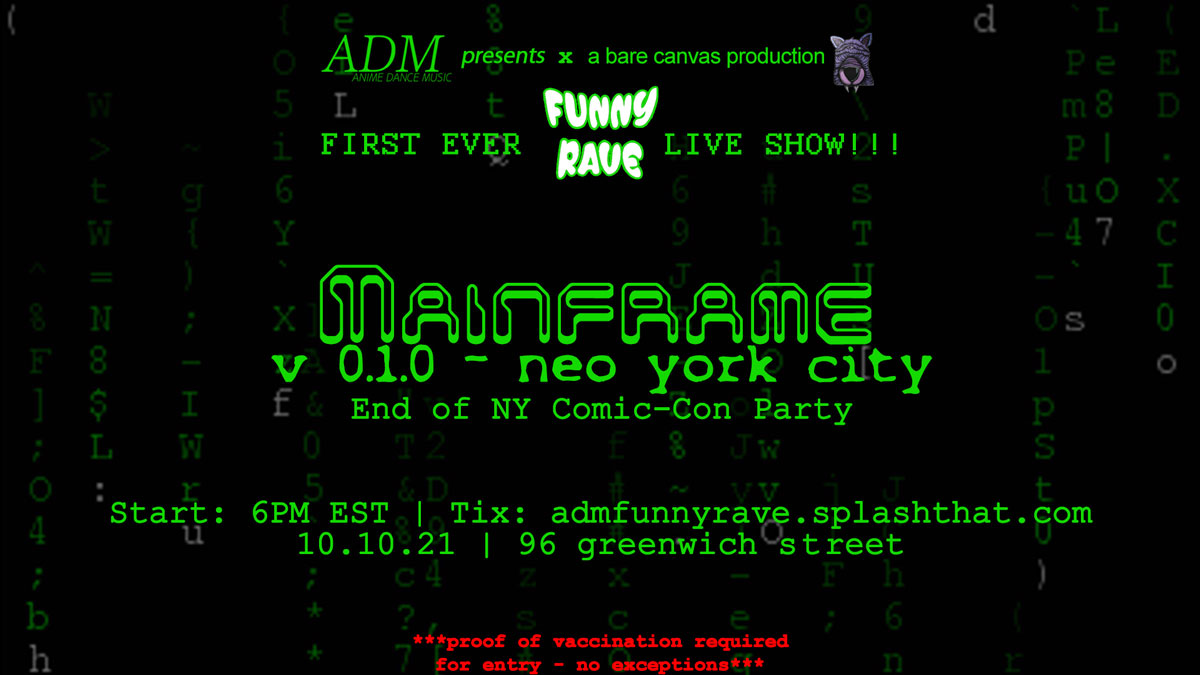 Sunday October 10th, 2021  Join Anime Dance Music for their first IRL party in over 5 years, as they team up with Funny Rave – The BIGGEST Online Rave on Twitch – to bring you an End of NY Comic-Con Matrix Themed Rave/Dance Party! 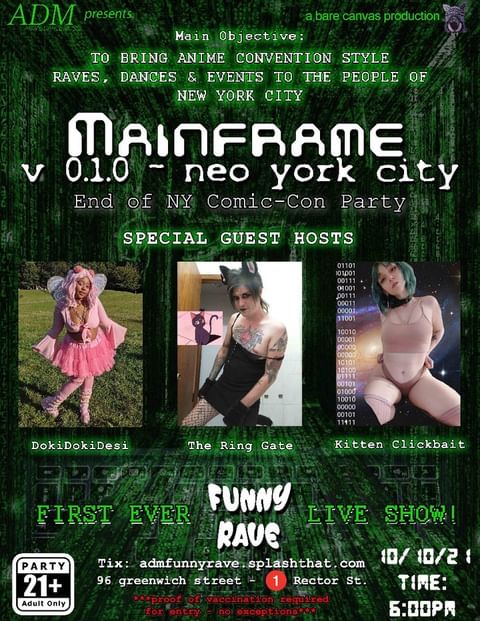 W.T. Snacks – Genre: Mashup
Internationally acclaimed DJ W.T. Snacks has performed at multiple anime conventions & parties throughout the United States & in Japan! With a wide BPM range of music in his collection. you will hear anything & everything as long as it’s Anime themed!

Jab50Yen – Genre: Mashup
&
H808 – Genre: House/Trap
We have brought from the West Coast two of the most well known names in the underground music scene on Twitter & Twitch! Representing Funny Rave, we have Jab50Yen & H808!! Their sets along with the amazing visuals that show during every hosted Funny Rave show has resulted them in co-running the biggest Rave Music event that Twitch has ever seen! And we are proud to host their first IRL show LIVE in NYC!

DJ Kagroosiv – Genre: VGM/Anime/Mashup
Residing in Elmont NY, KaGroosiv is a performer, gamer, AMV producer and DJ who specializes in primarily mixing funky chiptune, video game music along with rare sounds of audio grooves, projecting in diverse genres. With 4 years of experience in DJing gaming events, he has also played at social events for pop-culture conventions. Specializing in opening DJ sets, he strives to create an exciting audio ambience for gamers and anime fans together!
Come celebrate the End of NY Comic-Con & the return of large events with us!

The Contro1freak – Genre: Anime Dance Music
Hailing from Brooklyn, NYC, The Contro1freak plays the best music that Nerd, Anime & Meme culture has to offer. A massive fan of anime, he has had over 10 years of experience in the Anime Con & Mainstream community as a DJ. His collection contains a multitude of genres ranging from EDM & J-Pop to Hardcore & Drum ‘N’ Bass which he combines in his sets to form a genre that he calls “Anime Dance Music.” No matter the event, whenever he plays you will experience why he is “Your Waifu’s Favorite DJ!”

Awesomus Prime – Genre: House/Jersey Club/Dubstep/Trap
Awesomus Prime is the Rock Star convention Producer/DJ who doesn’t shy away from entertaining the nerdy masses. His music is dedicated to showcasing remixes and music inspired by your favorite video games, anime, and cartoons. Awesomus has been DJing the con circuit across the country quickly becoming a fan favorite and it’s easy to see why. He brings a highly energetic spirit to every set as he runs around dancing with fans, breaking it down and has been known to headbang the night away. He is also the CEO of the Anime and Gaming record label, Kawaii Kunai Music, which is dedicated to bringing you Nerdy Weeb Music for Nerdy Weebz. This Mech Warrior DJ is one artist you don’t want to miss!

SilkyBlack – Genre: Jersey Club/Mashup
SilkyBlack has been involved in the underground NYC Jersey Club scene for over a decade. His range of remixes, covers & original music has earned him plays at parties & festivals nationwide. When you hear original tracks from his “From Silky With Love” series of albums and you see those dreads bouncing as he plays, you will see why he is known as one of NYC’s most underrated DJs! 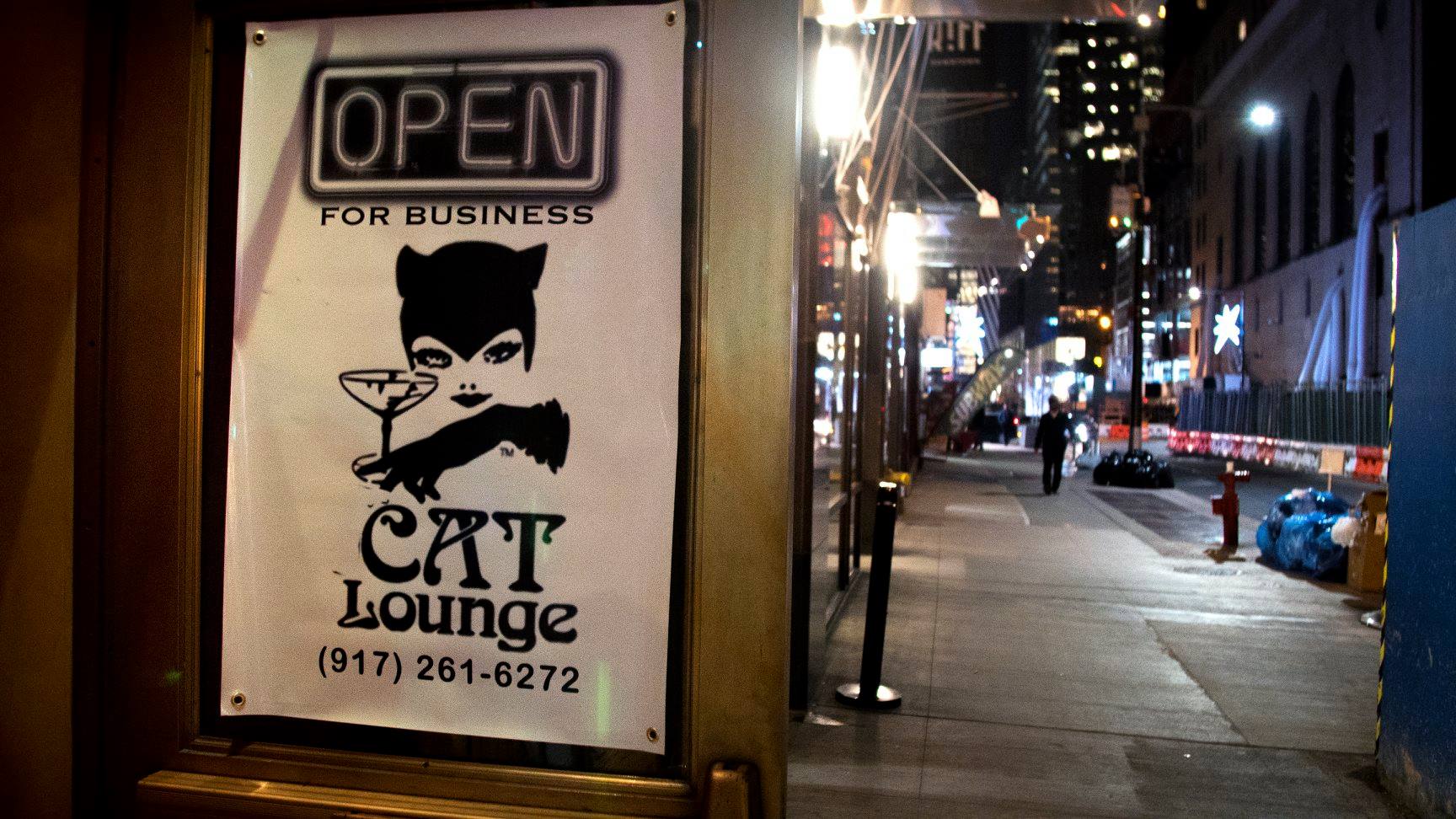 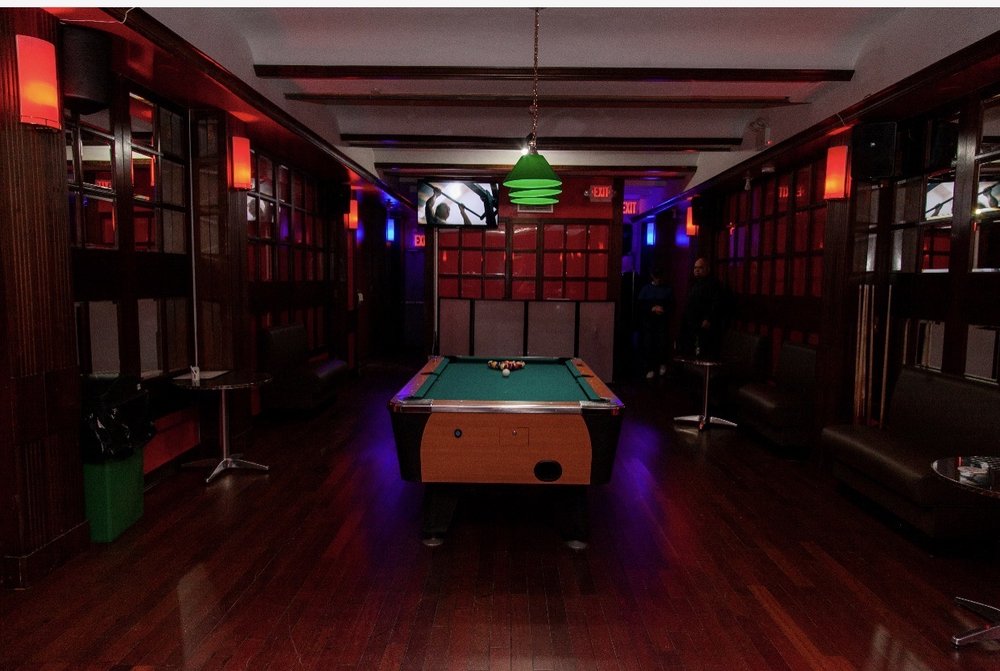