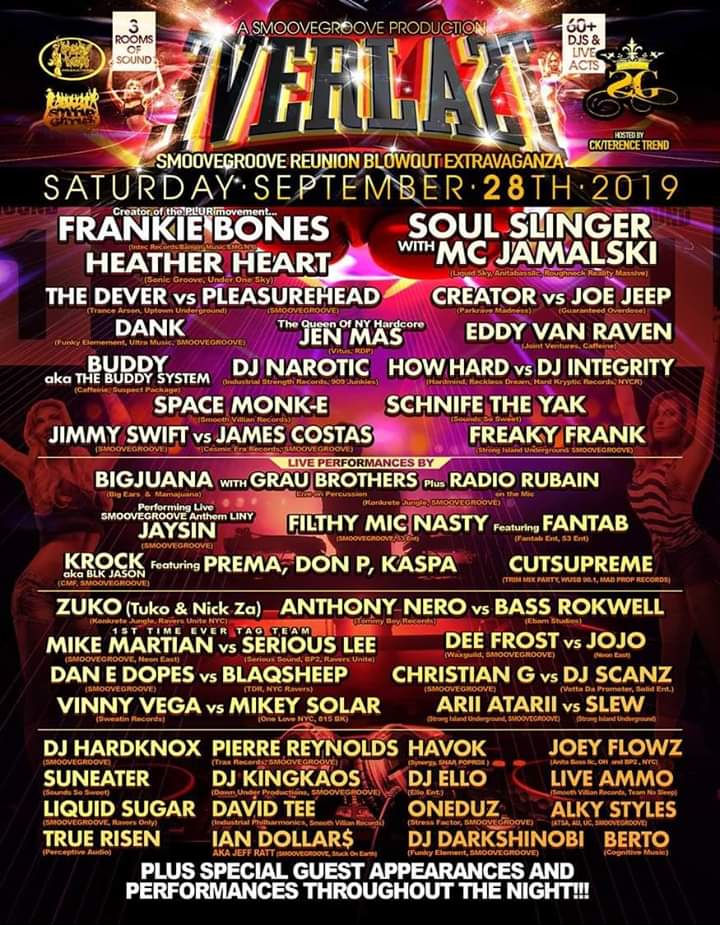 Several weeks after the hugely successful Reminisce rave in Brooklyn, New York, a perfect follow up took place in an unlikely venue near the town of Ronkonkoma in Long Island. Everlast was a reunion event for Smoovegroove productions, one of the premier dance music promotion agencies in the New York scene which was established in the mid 90s, headed by Carl Klass.

The venue included three rooms of nonstop upfront EDM from House and Techno to Gabber and Jungle/DnB played by many of the scene’s top DJs. And if you were one of the diehard devotees who arrived in the afternoon you had a chance to catch some of the free bar-be-que.

It was interesting to see an event of this calibre take place so soon after Reminisce; it has been a long time  since ravers of the 90s generation trooped the distance only weeks apart. And it was evident that the Smoovegroove crew really put some time and effort not only into promoting the event but carefully selecting a good balance between old school and up and coming DJs to serenade the crowd.

Bones and Heather stormed the main room with proper Techno.

Jen Mas spun a hardcore set not for the faint of heart, as usual.

Soul Slinger and Jamalski dropped manic Jungle beats on the Jungle Skankin Soundsystem, a wall of sound designed and built to deliver beats and basslines to the depths of your soul.

Just as it was in the early days, Long Island showed the scene what it is like to be a true school, in-it-for-the-long-haul raver. Even OG members of BTS were in the building making PLUR a top priority while devising plans to join forces with some of the scene’s top dons to continue building the scene and carry our culture well into the future and help pass the torch to a new generation of party-goers, ensuring nothing but positive vibes and good times from here on in.

After the main event, some of the scene’s pioneering DJs and promoters gathered at the home of Frankie Bones and partied well into Sunday afternoon as they did in the 90s. Ravers age, the music changes and technology progresses, but one thing remains the same – we are one big family under one sky.