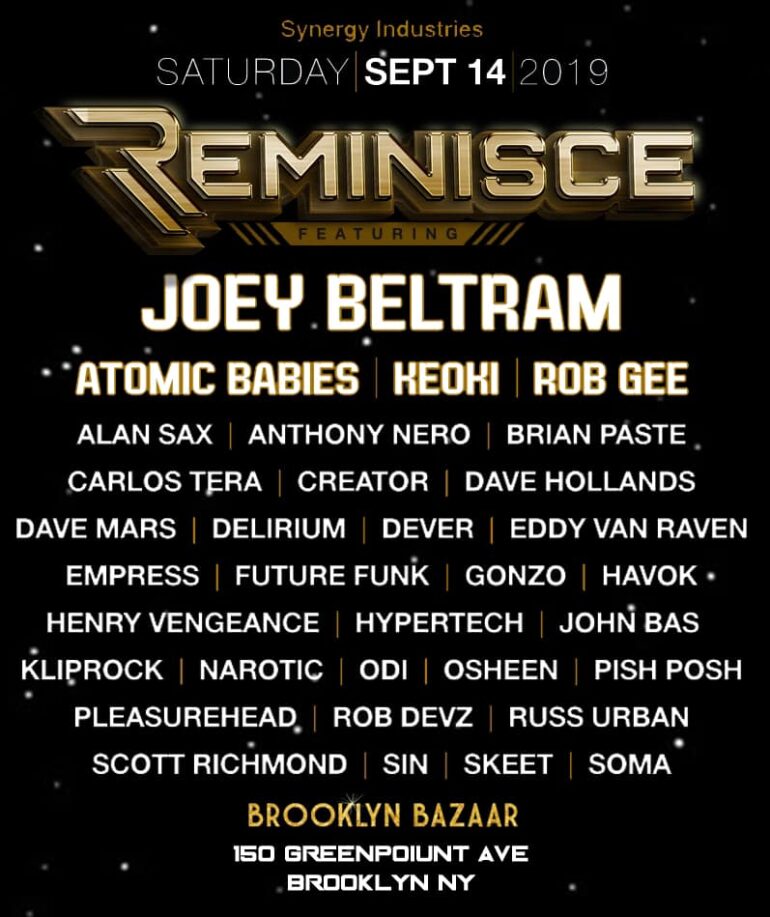 Several weeks ago hundreds of Ravers attended an event at The Brooklyn Bazaar, in Greenpoint, called Reminisce. These were not just any Ravers; the bulk of the crowd was well over the age of forty, not your typical age range for such an event. The event was organized by Synergy Industries (now known as District Underground), a Rave production crew, headed by Mike Annunziata with the help of Russ Urban, established in 1997. This party was promoted as a tribute to the old school New York scene and, not only was it wildly successful, it went down as one of the most legit gatherings the scene has ever witnessed.

Russ started a Facebook group in 2009 as a place to be nostalgic about the 1990s New York Rave scene. The group attracted the attention of quite a few old school party goers, promoters and DJs. Since then, some of them began to attend events around the area being thrown by newer crews such as New York City Ravers. Many began to reconnect and rekindle friendships via social media. While the scene has continued to thrive and garner attendees in every age group from all walks of life, many old heads agreed things were just not the same.

Some of the old school promoters had organized annual reunions over the last decade or so; promoters from NASA, Caffeine, Storm Rave and Limelight. Each event successful in its own right. Yet none had truly captured the essence of what it was to go to a Rave in New York in the early 90s when standards were set and the trends now associated with electronic dance music culture were conceived.

Russ and Mike spent about three months developing Reminisce. The time and effort they and their cohorts put into developing and producing this Rave became apparent around midnight on Saturday when the venue filled up with patrons and the music in each of the three rooms was well underway being spun by some of the most legendary and pioneering DJs the Rave scene has ever known.

Over the weeks leading up to the event the hype began to unfold on the Facebook group. Some of the would be attendees were posting about having to purchase plane tickets to make it to New York for the event as they had moved away many years ago. And, just as it was in the 90s, many Ravers came from all over New Jersey.

The lineup of DJs read like any party happening in New York city from 1992 to 95 with Joey Beltram, Rob Gee and Keoki headlining. Along with Gonzo, Osheen, Eddy Van Raven, Dave Hollands, Atomic Babies and Scott Richmond, there was no shortage of classics being spun, and many of them on original vinyl records as they were in the 90s. DJ Odi represented in the true spirit of Konkrete Jungle with his stellar old school Jungle and Breakbeat sets strung together seamlessly and sped up as he is known to do. Beltram, a true Rave legend and Techno pioneer, took the main dancefloor on a deep and soulful ride unmatched by many of today’s minimal and tech DJs. Rob Gee, one of the originators of the Gabber genre, turned the main room into Limelight’s Future Shock for an hour with his heavy hitting and spectacular performance style.

The visuals and decorations throughout the night were one of the most stunning and colorful displays of psychedelic art the New York scene has experienced in a long time. Each room was designed to fit its vibe.

The venue was spacious and clean, the staff and security were professional and friendly. The production crew provided free water for everyone and reentry was as simple as walking in and out of the front doors. The only complaint anyone heard was that the event ended too early, at 4AM; understandable since old school Ravers are used to partying well after sunrise, although not a deal breaker.

It seems every crew from the old school was represented in full at this event. The New York City scene has not seen a collaboration of promoters and DJs of this calibre since the mid 90s. If you attended NASA, Caffeine, Storm Rave, Limelight or any number of one off Raves up and down the East Coast from 1992 on, you were sure to see faces you recognized and old friends and dance partners you have not seen for at least two decades. Even a few of the younger generation dropped in to show their support and appreciation, and agreed this event was mind blowingly impressive by today’s standards.

There was no shortage of liquid dancing, glow sticks and old school Rave fashion such as UFO pants and Liquid Sky Design shirts. It was even apparent that some of the attendees managed to augment the experience with psychedelics and stimulants in the true spirit of Rave; you could see it in their faces. Everyone danced, hugged, laughed and loved the whole night long.

If ever there was a Rave to remember, Reminisce will remain in our hearts and minds for years to come, until another event like it comes along in a decade or two. Synergy Industries ought to be proud. The success of this event has proven that the Rave scene never died. It continues to thrive and shall carry on well into the future for generations to come.